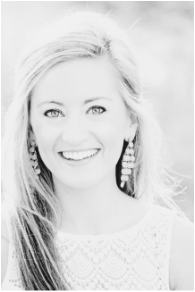 Kelly Gallagher, from Cleveland, OH, began Irish Dancing at the age of five for the Theresa Burke School of Irish Dance. Under the instruction of 'Tessie', Kelly had a very successful competitive career competing throughout North America, Ireland, England, and Scotland. Kelly's highest accomplishments include becoming the Mid-American Champion and qualifying to compete in the World Championships every year since she was 10 years old.  Kelly was also honored to receive the IDTANA (Irish Dance Teachers Association of North America) scholarship which is awarded to dancers who excel in competition as well as academics.  In Kelly's family, Irish Dancing is a family tradition and she was influenced by her Mother, Grandmother, aunts, uncles, and numerous cousins who all studied and competed in Irish Dancing as well.

After graduating from High School, Kelly went on to the University of Dayton and earned her Bachelor's Degree in Civil Engineering with a minor in International Business. Instead of pursuing an engineering career, it was always Kelly's dream to dance in Lord of the Dance. In 2009 that dream became a reality when she was asked to join the 2009 Fall North American Tour. One of her favorite memories include dancing along side Michael Flatley in Taiwan in front of crowds of up to 30,000. Kelly has also enjoyed traveling around the world with the show; Israel, Romania, Croatia, and Portugal are her favorite countries she has visited.

Kelly has also enjoyed dancing for other professional Irish Dance companies.  In 2008 she was chosen to join the Trinity Irish Dance company and enjoyed touring the east coast of the US.  In 2009, Kelly joined the production, "Echoes of Ireland", and toured the west coast of the US as the female dance lead.  Most recently, Kelly has joined the cast of  "Celtic Crossroads" for their 2014 North American tour.


Over the past 5 years when not on tour, Kelly has taught for the Tessie Burke School in Ohio as well as at the "Rhythm and Rince" dance camp in Tennessee.  Kelly has learned so much from Tessie and is grateful to have taught at her school. Kelly has really connected with the students at the Burke School and has found a passion for teaching.  Kelly teaches all levels of classes and private lessons- from 4 year old beginner dancers to older world championship dancers.